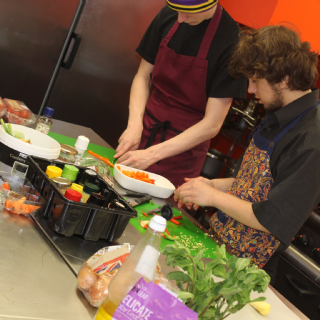 Orangebox young people’s centre in Halifax is one of only six groups in Yorkshire that have been shortlisted to battle for the public vote and £50,000 of lottery cash in ITV’s The People’s Millions TV competition.

Orangebox will make a bid for viewers support to win the £50,000, with the public voting by phone to decide who wins the prize. On Tuesday 25 November 2014 Orangebox will highlight on ITV’s Calendar News programme its ‘Snack in the Box’ café project, which focuses on offering young people employment and training opportunities in a professional café environment.

Suzanne Wynne, Projects Manager for Orangebox states: “It’s difficult for young people to get into employment, health, obesity and body image are repeated concerns for local young people. If we win the People’s Millions, the Snack in the Box café project can help young people overcome these concerns by offering employment and training in healthy cooking, growing food, catering, customer service, food hygiene, creating menus, marketing, team-working and budget management. We aim to employ 10 young people in the café and train a further 100 young people over a year.

Orangebox had a pilot project earlier this year run by Project Challenge, which was a great success in which young people were trained in the Orangebox café and went on to gain employment. Snack in the Box will open this opportunity out to more young people and The People’s Millions will enable us to do this – so if you think this is a worthy cause please vote for us on Tuesday 25 November.”

Orangebox will be filming a TV appeal with ITV Yorkshire to be broadcast on Calendar News on Tuesday 25th November. From now until the film is broadcast its young people, volunteers and staff will be raising awareness of the public vote and encouraging people to vote on the day.

To support Snack in the Box visit http://www.peoplesmillions.org.uk/2014-finalists/yorkshire-north/snack-in-the-box